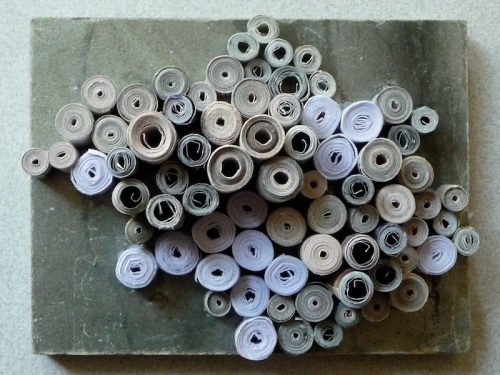 Turning recycled paper into art is a great way to give it new life. There are some amazing and inspiring examples of rolled paper art, which I have linked to at the end of this post. And while they may seem long and involved to make, small versions can be just as impressive. As long as kids can roll a strip of paper, they can create something cool to display and enjoy.

END_OF_DOCUMENT_TOKEN_TO_BE_REPLACED 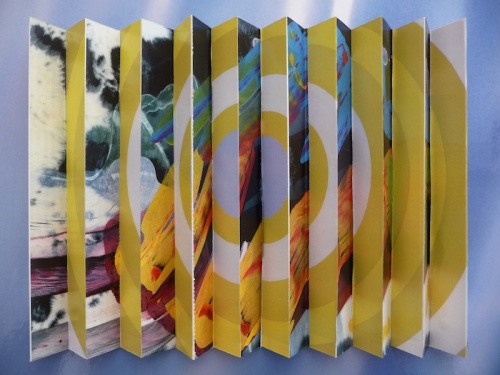 I recently attended OCAD University’s annual Grad Show, which is always brimming with interesting ideas. This time, I came away intrigued by Iris Fong’s look at perspective, and thought it would be an excellent way for children to see how perspective changes, based on your relative distance or position.

END_OF_DOCUMENT_TOKEN_TO_BE_REPLACED

Years ago, we had a visitor from Japan who gave us a kusudama flower she had been discreetly making during her stay here. It was simply beautiful. Over a period of several months, she had been quietly cutting, folding and assembling pieces of newspaper in her room whenever she had some spare time. That meant folding 60 petals, assembled into twelve flowers, to create a ball-like shape referred to as kusudama. She also added a touch of watercolour paint to the edges, using one of those cool Japanese water brushes. You can see a photo of the flower at the end of this post.

This project involves making just one component with 5 petals, as pictured above. However, if you’re feeling inspired…

END_OF_DOCUMENT_TOKEN_TO_BE_REPLACED 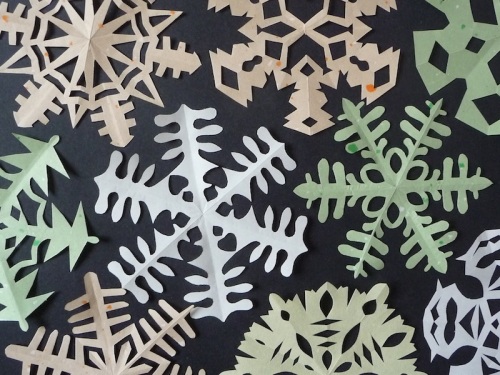 Snowflakes are such a beautiful symbol of winter. You can even admire their intricate patterns with the naked eye. Physicist Wilson Alwyn Bentley was fascinated by them, and became one of the first people to photograph them back in the late 1800’s, capturing more than 5000 amazing images in his lifetime. END_OF_DOCUMENT_TOKEN_TO_BE_REPLACED

The urge to decorate is at an all time high, and less is more is not everyone’s mantra. Neither is good taste. So let’s all take a deep breath, calmly walk past those cars with red nose antler combos, and find solace in the fact that it will soon be over. It’s a safe bet that a few flapping birds will not elicit any intense, negative feelings. Besides, they’ll be safely inside your home.

END_OF_DOCUMENT_TOKEN_TO_BE_REPLACED

Henri Matisse, who was born in 1869, was an immensely talented french artist who worked as a draughtsman, printmaker, sculptor and painter. He is considered by many to be the most important french painter of the 20th century. During the latter part of his life, his health deteriorated, often leaving him bedridden or forced to use a wheelchair. As a result of these constraints, Matisse explored new ways of expressing himself and began to make large scale cut paper collages. They allowed him to show off his incredible sense of colour, and remain among the most influential works of his career. He referred to his experimentation with cut outs as “painting with scissors”, and covered the walls of his room with them, transforming his environment into “a little garden where I can walk.”

If you’re in need of some playful ideas to decorate your child’s room, why not consider colourful paper cut outs to brighten up a wall, or create a unique looking border. All you need is an inviting pile of construction paper, scissors, and some enthusiastic children to create an explosion of colourful, organic shapes.