Travelling with a favorite toy and photographing it in front of various landmarks, began as a totally off the wall idea known as the travelling gnome. It originated in Australia in the 1980’s, and is now firmly entrenched in popular culture. I first came across it in the quirky little french film Amélie, and I’ve been dying to do it ever since. Adults may have come up with this idea, but it has plenty of kid appeal. All you need is a toy and a camera.

Since garden gnomes are a bit cumbersome to lug around, we invited our temperamental little friend, iBat, to join us on our USA road trip, where we travelled from Toronto to Florida and back in just under three weeks. We stayed in ten different cities, with plenty of pit stops along the way, and a nice lengthy stay near Hogwarts. iBat was thrilled to come along, but returned home sulking because I forgot to photograph him at the Edgar Allan Poe Museum in Philadelphia. He was right there, hanging off the back of my purse, but I just plain forgot about the little guy, and snapped a ton of shots – without him.

In no particular order, here’s a glimpse of what iBat was up to on his road trip:

The beautiful city of Charleston  was an immediate favorite, particularly when iBat caught a glimpse of this shop window, which appealed to his darker side. 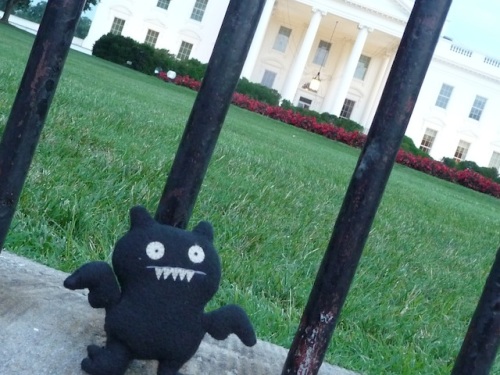 Here’s iBat in Washington DC, admiring the back of the White House.

As we prepared to leave our hotel in Raleigh NC, iBat reminded me I had forgotten to photograph him in town the previous evening. Not wanting to face his wrath, we quickly pulled over, shot a photo of him in a tree, and watched his mood slowly improve over the next few hours.

The highlight of this trip for everyone was visiting the Wizarding World of Harry Potter in Orlando. They did a fabulous job at recreating the town of Hogsmeade, where iBat fit right in.

Here he is indulging in a little Butterbeer or three.

Here’s iBat’s last shot in front of the Hogwarts Express. Leaving was not easy for any of us, but iBat truly lost it, and sobbed all the way home.

Dinner at the legendary Dinosaur BBQ in Syracuse, was a fitting way to end iBat’s road trip, with yet another dinner of ribs, pulled pork, and fried green tomatoes. The little glutton moaned all the way to Buffalo. 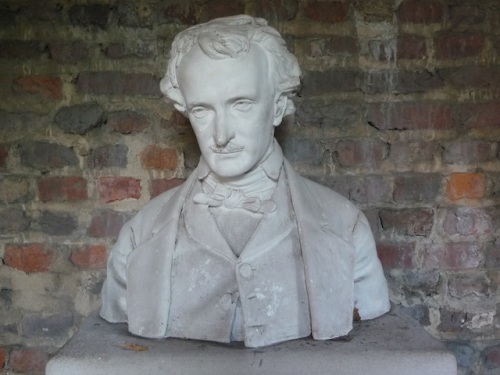 Finally, this bust of Edgar Allen Poe from the Poe Museum in Philadelphia, was where iBat had hoped to be photographed. He’s still working on forgiving me.